I love matches, the idea that you can take fire from the country you’re visiting home, is magical.

When I was in Mozambique seven years ago I bought a single box of matches.

On the front was an illustration of a Impala, on the back was a map of Mozambique.

I treasure these matches, in fact I’m sure I still have some left in Canada.

I use them to light Sage, Palo Santo and candles for special occasions.

I believe using fire from specific places enhances the effect of any intention you are attempting to produce.

When I was in Kisangani several weeks ago having Fanta with Michelle, an old Congolese boat captain smoking .03 cent cigarettes.

I was quietly admiring the way he struck each delicate match against the book without ever failing to create fire.

Revealing both his passion for self destruction and his capacity to create harmony between movement and friction.

It was a pleasure being purified by his second hand smoke.

The brand of matches he used had a butterfly on them.

I noticed immediately, because, HAVE YOU BEEN SLEEPING! I love matches.

“Where did you get those” I asked.

“What, matches? You can get them anywhere” he said.

But I couldn’t find the ones with the papillon, (the French word for butterfly).

And fam, I looked.

From Kisangani it was a six day boat journey to Bumba.

It’s was there in Bumba where I found Papillon matches.

A small boy was selling single packs from cubes of 100.

Now, the design of these match books is something special.

Their yellow, with…y’know what. Here’s a picture.

I didn’t realize when I saw Michelle’s matches, that every book has a different butterfly on it.

Each has beautiful butterfly that exists here in Congo.

The boy and I sat in the small sandy square and opened package after package so I could see every version.

In a beautiful way it reminded me of when my mom would give me a dollar to buy Pro Set hockey cards, or Upper Deck baseball cards. (those holographic team logo stickers were my jam jam)

I actually IRL just took a minute to remember where my sports card collection is.

Meanwhile, me and the boy are sitting in a pile of matchbooks fiending over them like Pogs in the 90’s

or a Magic the Gathering rare expensive collectible.

I didn’t realize that many many people were gathering around to see me, the Mondeli (Muzungu).

“Why are white people so weird?”

After selecting my favorite butterflies, the priest accompanying me encouraged we change venues and quickly.

Back to the boat!

Six days into the rainforest and I find these mystical matches.

and the White Nile in Uganda. 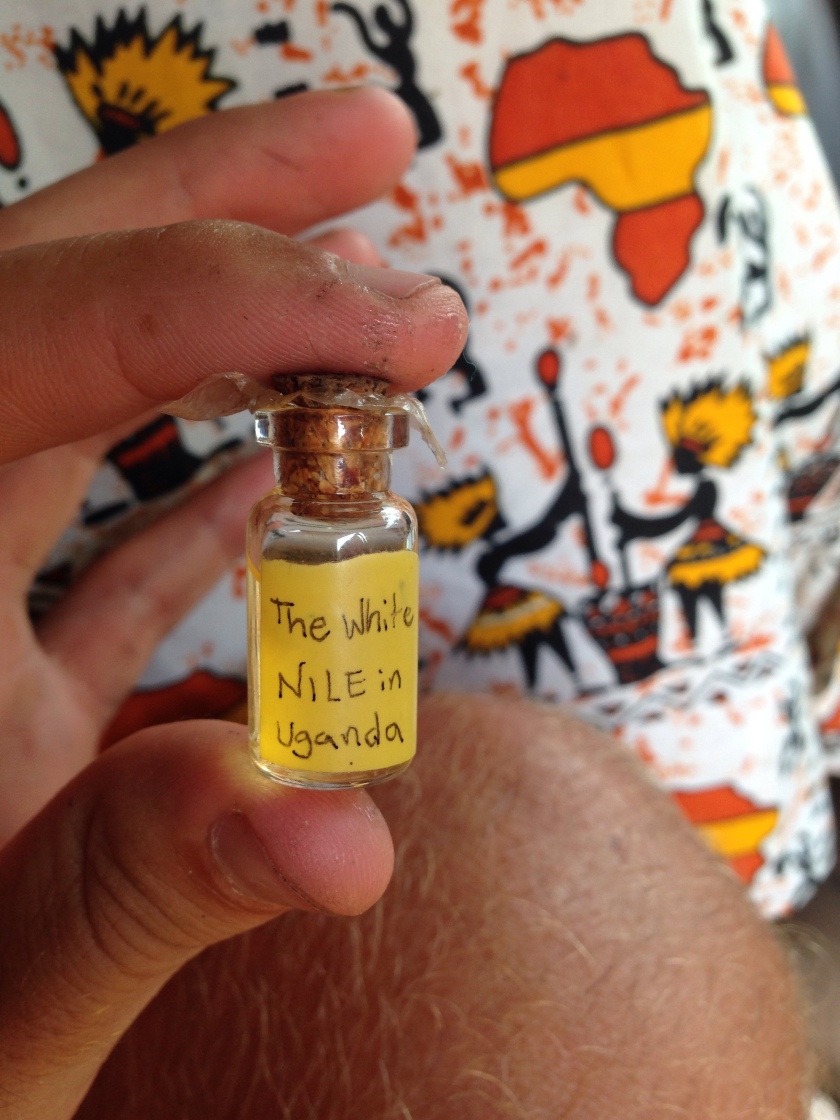 The Nile complete in all its mind bending perpetuity.

I don’t want to stray too far off topic, but I also believe in possessing water from specific places.

Because we’re all basically Aqua.

I don’t mean to brag buuut, I have water from the Dead Sea.

Good luck getting through Jordanian security at the airport in Aman with a vile of water and matches.

If I lock on to an idea, I’m steadfast in seeing it through.

For the remaining two weeks on the river, I imagined that there was a version of a match book with a Blue Morpho butterfly on it.

The Blue Morpho is a very rare butterfly found in the Amazon and possibly Congo.

I’ve seen it here in Peru.

The idea I locked on to was:

Once I Arrive in Kinshasa, go to the address on the match book and ask if they have versions with the Blue Morpho butterfly.

Yesterday after getting my visa for Congo Brazzaville, I took a motorcycle to the industrial area, where the match factory is located.

The area was the Kinshasa industrial district.

There was a structure that stood out, it looked like a castle or interactive haunted house in California Adventure.

I asked Jeremy, the driver, to pull over so I could photograph it. 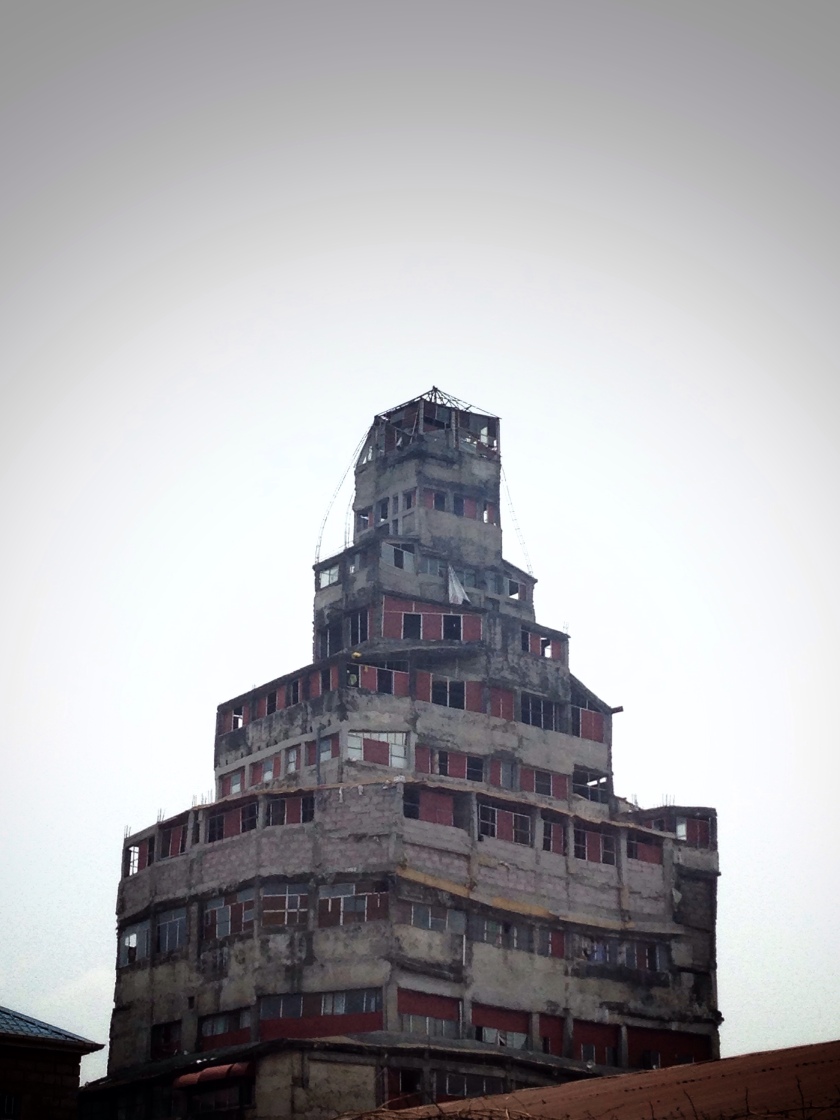 Since we were lost. He obliged me.

Coincidently, the Willy Wonka building happened to be next to the entrance of the match factory.

My best friend Celeste explained to the security guards that I was there to buy blue papillon matches.

The guard said I would have to buy boxes in order to enter.

“I’m considering it” I said.

Celeste and I enter, Jeremy stays with the bike.

We enter a small office, where a Congolese woman, who’s excited to see us asks us to sit down and explain why we’ve come.

“I’d like to buy blue papillon” matches.” I say.

While Celeste is doing his best to translate, I’m casually sifting through a pile of matches with torn cellophane wrapping.

Looking for my precious Blue Butterfly. 🦋🦋🦋

And a man, small in stature with a distinguished grey beard and soft, wise eyes enters the room.

I lead with my right hand as I introduce myself in French.

“Where are you from” he asks in perfect English.

“I was born in Calgary, and recently lived in Vancouver” I said.

“I’m from Toronto” he said smiling.

My first Canadian in Africa!

He invited Celeste and I into his home, within the Factory to talk.

After a brief walk I was standing in a beautifully furnished home, with incredible pieces of art from Peru, Tibet and of course, Africa.

A Phycadellic Ayahuasca inspired tapestry from the Amazon, hung in his bedroom.

A Beautiful painting his son created.

A charcoal profile drawing of a beautiful man, also his sons.

A Separate Reality by Carlos Castaneda.

I recommended the music of Harry Nilsson.

I was in my personal Nirvana.

We talked about life and death, how both are simple descriptions that attempt to define the abstract reality of the infinite.

How completely incomplete it all is.

The stars, planets and forever.

We talked about music, India and of course the his inspiration for creating the papillon butterfly match books.

Yeah! He made them.

He wanted to bring attention to the beautiful nature here.

He explained his matches don’t use sulphur, they’re non toxic.

We talked for so long, in fast seamless ideas that Celeste, who knows basic English, retired to his phone to play games.

My new Friend invited me to stay for a Vegan dinner ( an unbelievable option here in meat loving Congo. I’m speaking as a vegetarian, trust me)

But Jeremy my motorcycle driver was waiting, I admitted I was already taking too long.

He admitted he had to go back to work, he had a full day of meetings because he’s traveling to Belarus on Saturday.

He gave me a two BOXES of matches as a parting gift.

Standing there, shaking this wonderful mans hand goodbye after having the most stimulating conversation I’ve had in four months, with a box of art under both arms.

I realized he was wearing a blue shirt.

He was the blue papillon I needed to interact with.

I call this magical meeting the Papillon effect.

**not Harry Nilsson, but a beautiful song by the Congos.