I would rather shave my balls with a dull pair of miniature safety scissors, than ever endure another visit to the Equatorial Guinea embassy, in Libreville.

Thank you very much.

The Equatorial Guinea embassy in Libreville had been endured, successfully.

I couldn’t let the fruits of that particular labor spoil.

The Equatorial Guineas visa must be activated.

However, take one very annoyed Bobby.

Imagine he’s imagining the hassle of crossing into a now “unnecessary” country by land.

All to reach Cameroon.

If imagining that makes your armpits more sweaty than usual, you may understand the draw of bypassing Equatorial Guinea altogether. 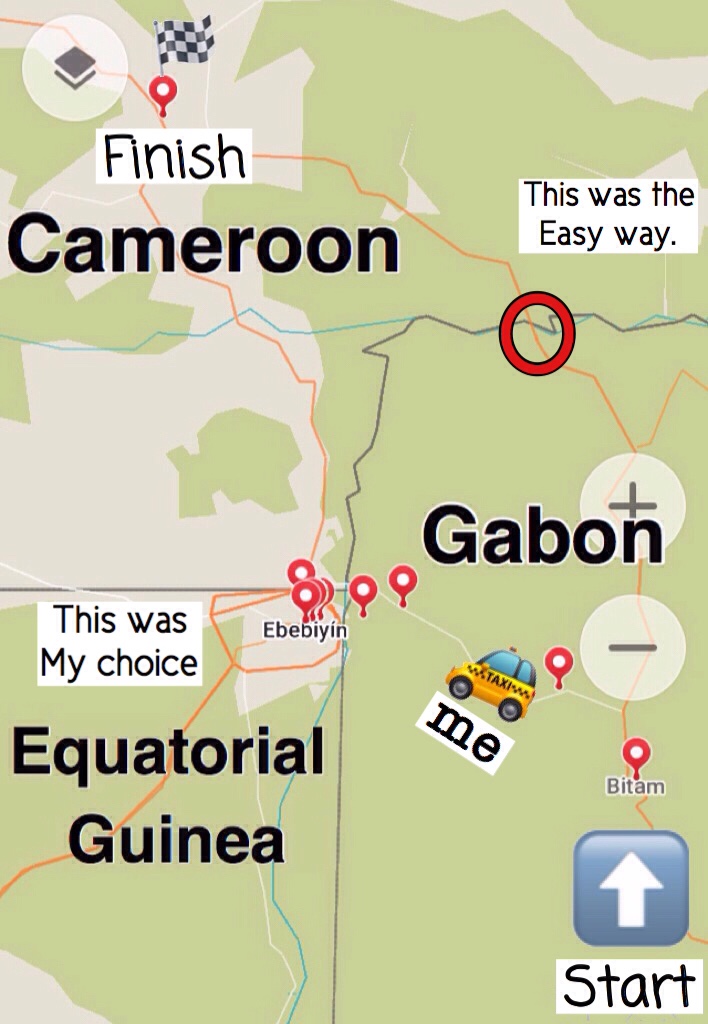 I waited at the immigration office in Bitam, the last town in Gabon capable of issuing the illusive exit stamp, my Moby Dick. 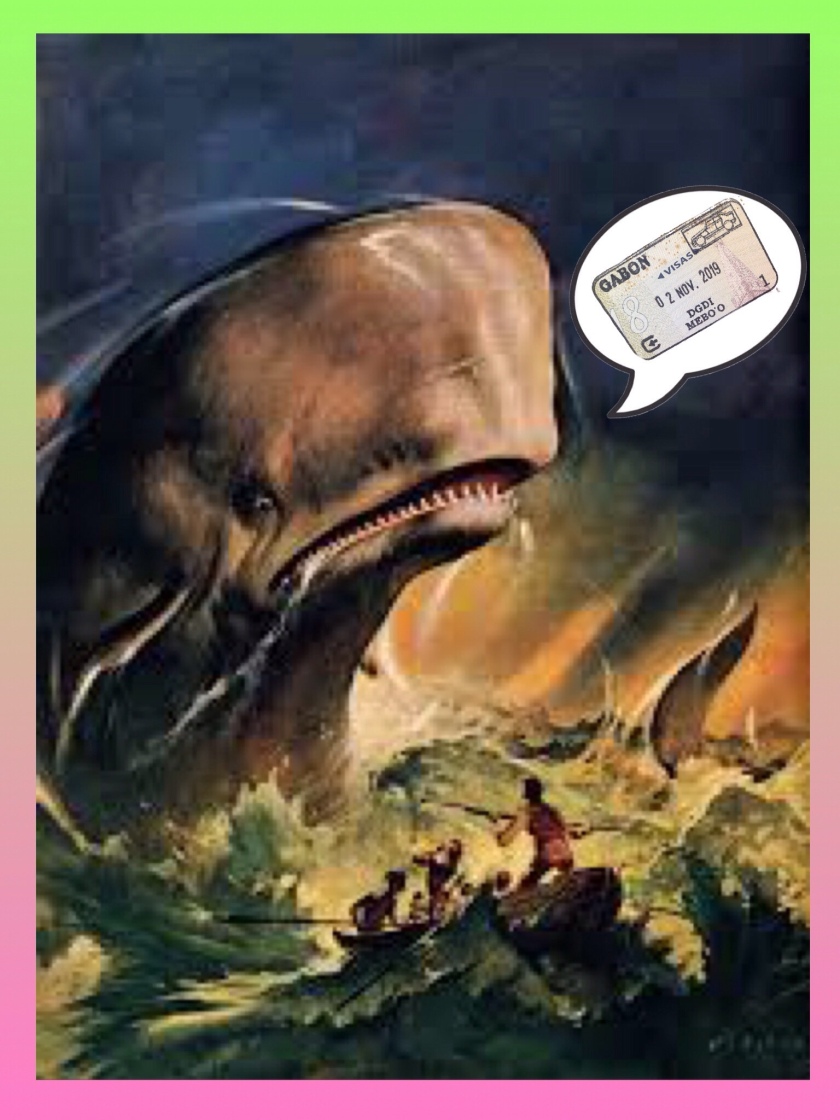 Thus, this Dick can eat a Gabon.

And Gabon a Dick.

After a brief wait in a sun soaked vestibule, that is immigration in Bitam.

Me and twenty other transient African gypsies rushed into a small office where a tired looking cop, stamped everything pushed in front of him.

Despite being one of the first people inside the office.

I was the last to leave.

Afterward I went to the local taxi stand to buy a ticket, then got myself a hot egg sandwich.

“You’re just gunna take my dirty brown money, then touch all the ingredients going in my mouth, Huh?” I thought, considering the last time I was food poisoned.

I waited by walking in tight, lazy circles as the very same African Gypsies I was jockeying with inside immigration, began arriving at the taxi stand.

I recognized most of them, with a hot egg sub salute.

I’m last to leave immigration but first to arrive at the taxi stand?

I was thinking deeply about the plausible physics of how this could be possible, while aggressively throating my hot mayo sandwich.

The driver hissed at me.

Then my brain or my essence or …I don’t know, flashed an idea into me, like a sun spot.

Like when you close your eyes after staring into the sun, because like me, you’re an idiot.

Or find yourself voluntarily staring into the business end of Melissa’s phone, posturing artificially as her flashlight sears your delicate jelly eyeballs, then supernovas into a blast of white light, fucking you up for the next 5 minutes.

People laugh as you stumble around a dark pub, using ecco location to take a shit.

All for a photo Mel is def going to delete the next day.

All to say, this new mysterious compulsion of mine was now caught in the nets of my free flowing, self imposed spontaneous directive machine.

A place where my ability to discern between fantasy and logic resembles a Monet. 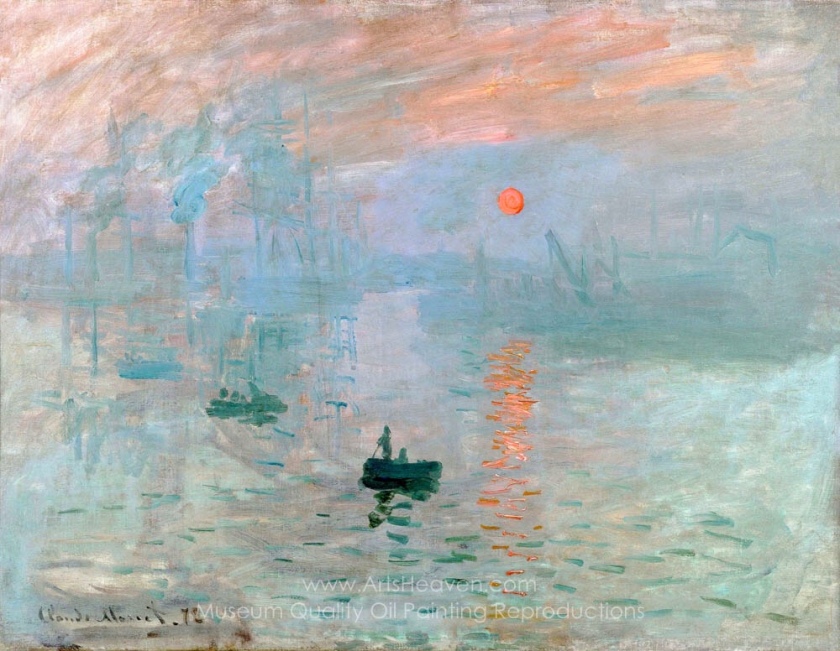 I finally have the exit stamp for Gabon, I thought.

Should I drive seventeen hours back to Cocobeach and cross the border with Patrick?

I mean, It is possible.

I pawed the idea, while the driver hissed at me again, like an anxious snake.

By simply acknowledging going all the way back to Cocobeach, as a remote possibility, provoked a long sigh to fall from my agape mouth.

I was jousting myself.

Perhaps to determine if my thresholds have changed.

Six of us were thenpoured into the rickety car.

I told the taxi man to take me to Ebebiyin, Equatorial Guinea.

“But Cameroon is closer” he tried explaining.

He knew I had a Cameroon Visa.

He knew I was going there.

What he didn’t know is, I’m not in control.

He needs to talk to the manager, and he already made the decision. 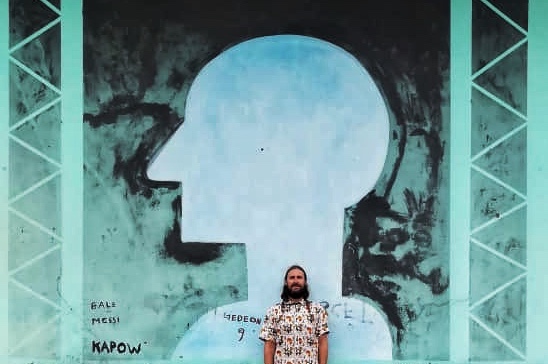 I’m just a reflection, a personal assistant, at best.

He made a small U-turn, complying with my very confusing wish.

A wish that was now being debated by everyone in the car.

Imagine if Aladdin wished for 3 hours of waiting at a registry for someone who can’t speak his language, to give him a licence plate for carpet? 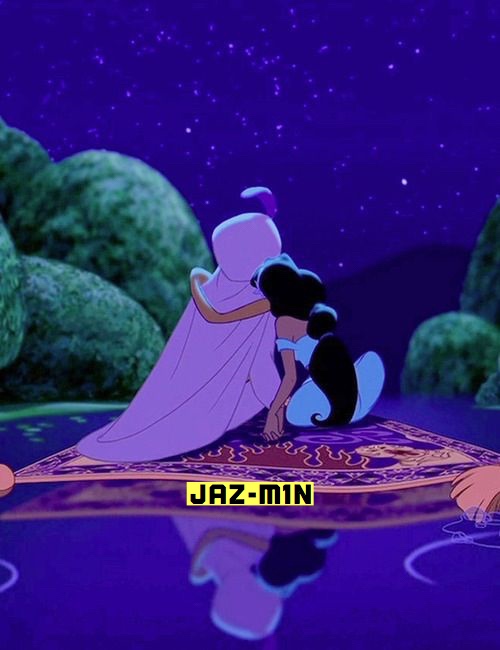 Fuck yeah, he would. 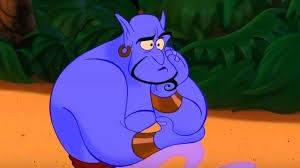 All I had to do was sit in the taxi, and wait for Cameroon to appear.

Bobby wants to go to Equatorial Guinea for coffee, THEN Cameroon.

It’s almost as if I’m suspicious of things that seem too easy?

The car stopped at the frontier of Gabon and Guinea Equatorial.

The road connecting the two countries was recently partitioned by a shallow flood.

A flood that no car, certainly not my car, could successfully navigate.

We had to walk across the border, Mexico styles. 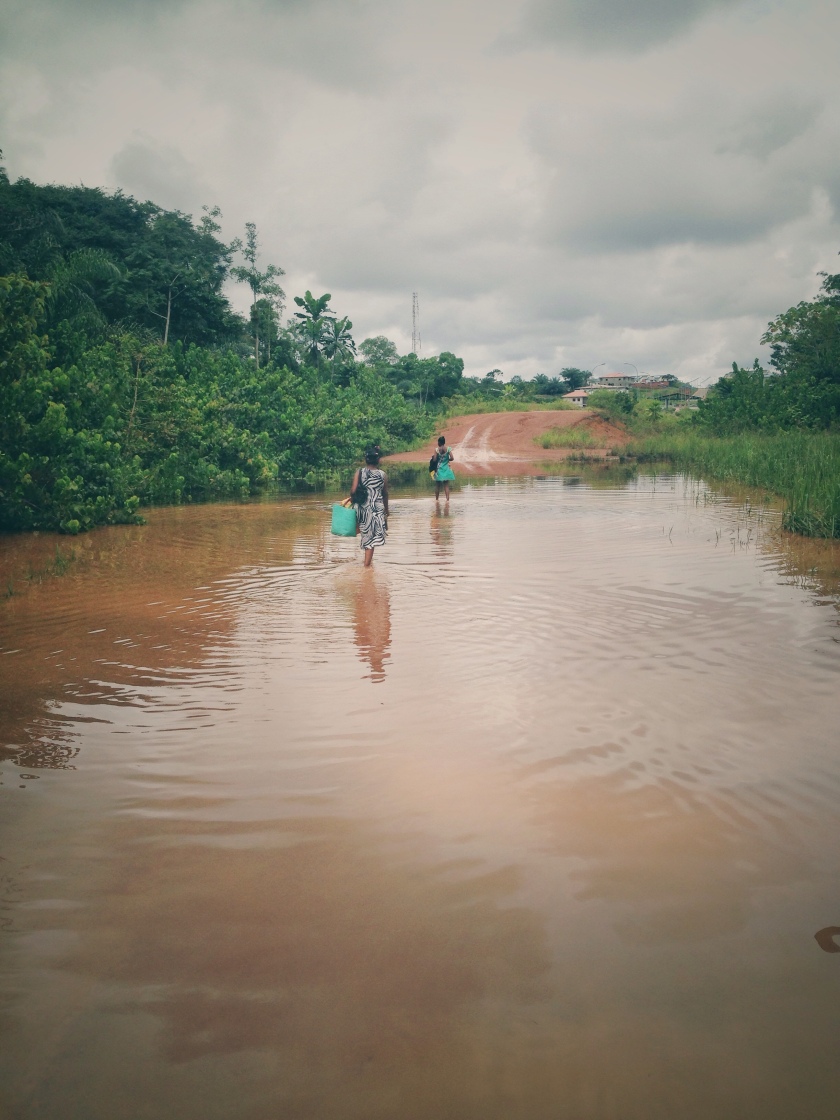 The Driver casually pointed toward the water with his chin as he counted the money I gave him, assuring me walking was normal.

“This will be the last time any Gabonese person will ever touch my passport.

Because, it will not happen again in your lifetime.” I said to myself, as the border cop fumbled through my passport with the sour look of suspicion powdered on his face.

I decided to walk to the Equatorial Guinea border shack, barefoot,

instead of stuffing my muddy feet back inside my lit (Chinese) nikes. 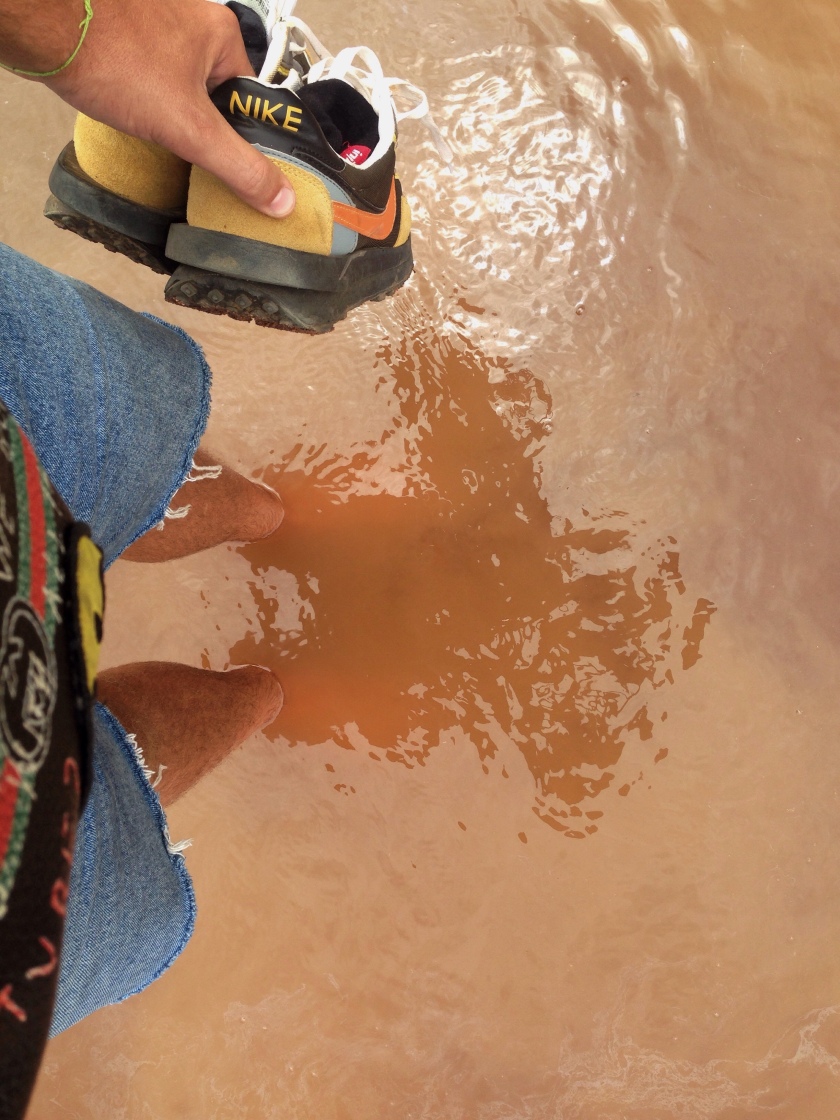 “Hola, cómo estás?” I said, excited to use something other than my retarded french accent.

Spanish people, I thought, always thinking your better than everyone.

Once I was finally inside Equatorial Guinea, I could tell I created a bit of a problem.

Soldiers were on their phones calling superiors.

Spanish was being hurled around me, like a game of catch phrase.

The guard that was soundly sleeping when I arrived, was now awake and bleary eyed.

The fuck is going on, he kept shaking his head.

I was instructed to sit down.

“Where are you going?” the main dude, Jimmy asked.

“Bata” I lied to right to his face.

If I told Jimmy I was going to town for a coffee then going to the Cameroon border, he would have refused to ENTER ME!

Get in here Jimmy!!

But seriously, me no enter country, me say truth to Jimmy or Jimmy friend.

He, Jimmy and I went into a room where I was told I had to pay 20,000 francs, to get my Equatorial Guinea entry stamp.

“Seems shady” I said, as a point of fact.

“No” Jimmy said, as Jim Jimmy, shook his head slowly.

I wanted to show them on paper, with a currency conversion app to assist me, exactly how much the Equatorial Guinea Visa + entry stamp compares to every other visa I have in my passport.

I wanted them to see their corruption.

“Which is equivalent to 266$ Canadian dollars.”

Dwarfing every single Visa I have.

Substantially, I said, stabbing at the total with my pen!

They shrugged, “Yeah whatever.”

After I payed the bribe, I went back to the shack where a dude with a tooth pick in his mouth made my backpack his bitch.

He found all my secret spots.

Even my secret money and credit card compartment.

Seriously, this dude must be one hell of a lover.

No butthole too icky.

It was a pleasure watching him work.

He even went through my journal.

As people crowded around him, all eager to see what was inside my leather bound book.

They loved the money from other African countries.

When he reached the Republic of Congo chapters and saw his precious Central African Franc sandwiched between the pages of my journal as a keepsake, he and they, seemed to understand me better.

He’s collecting the things that make us different.

They didn’t look at their money with desire, instead, here in this little shack, they compared their notes artistic presence, to the rest.

It was a cool thing to watch.

Way better than, Orange Is The New Black, season 3.

Once my bag was throughly violated, I took a taxi to the very small town of Ebebiyin.

Inside a cafe were two rows of benches running parallel to one another.

Feng Shui insistance that each side of the room stare at the other.

Maybe talk to each other?

It was here on planet earth, I chose to have a fried Banana, a fish tail and a coffee.

I had a long conversation with three young footballers about the world at large.

Their little part of it, mainly. 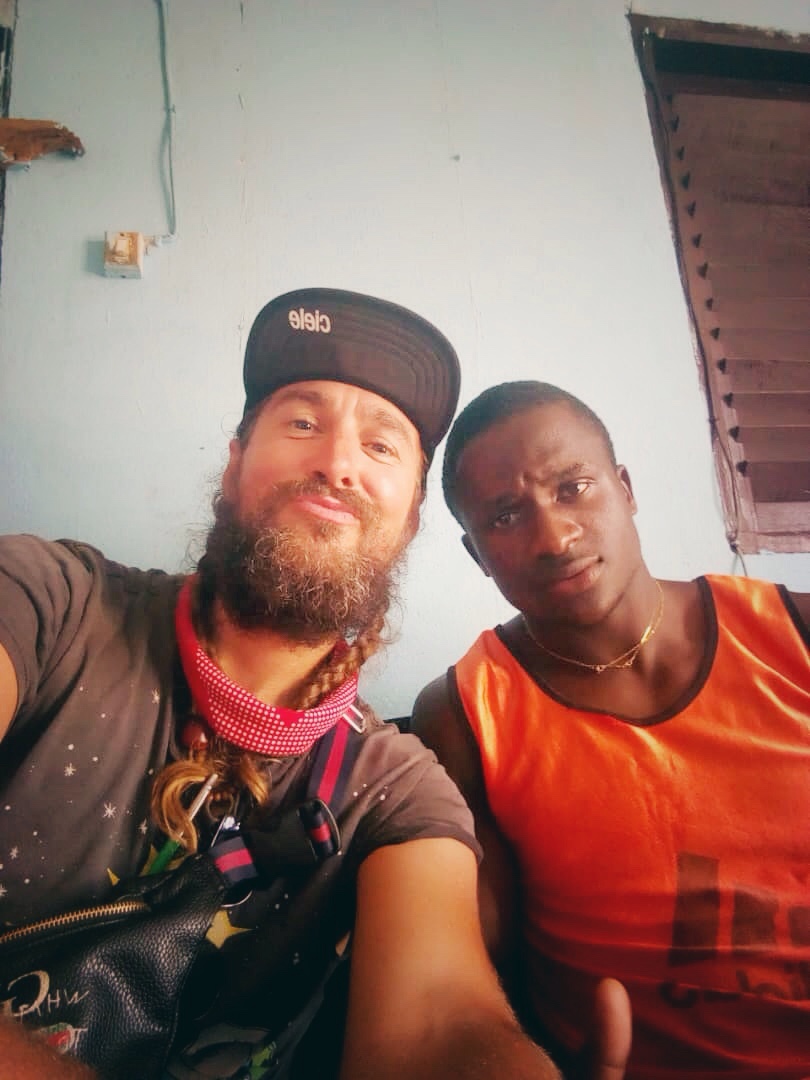 Did I probably convert them to Anarchy?

I promised I would write them each a letter of invitation, should Canadian immigration request it.

If they ever wanted to visit Canada.

I hope they do.

I asked the woman who made me lunch, how much?

She and everyone else in the restaurant were excitedly explaining that the bill was 600 francs, not 3000!

That I gave too much.

They were trying to help me.

Trying to protect me.

I payed, 270$ to get to this restaurant, I thought to myself.

A five dollar tip for a meal that costs a 1$?

I’ve spent more than this at worse restaurants.

I stood and explained to the entire restaurant, eleven people in total, that in Canada, its customary to tip if the food and company are exemplary.

What they didn’t know, was that I was also celebrating my transition from Gabon.

That this was a very special occasion for me.

Wrapped of course, within a much more profound African occasion.

A turducken of special occasions. 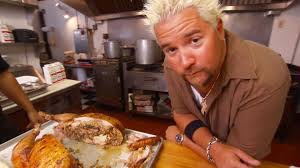 Drive everyone from the restaurant to Quentin Tarantino’s house before Bonnie gets home, we have to clean Equatorial Guineas brain off the leather interior. 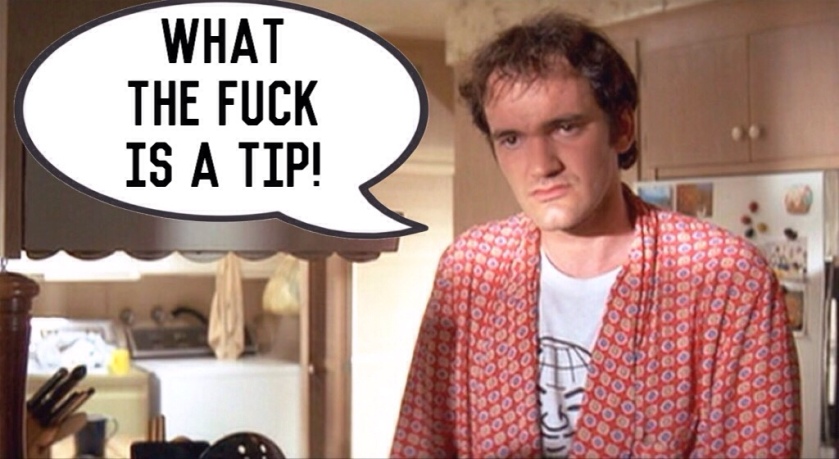 After my second cup of coffee, the footballers helped me get a taxi to Kye Ossi, the border of Cameroon.

“Oh shit” I thought as I was driving away.

I don’t have any pictures of Equatorial Guinea.

Melissa would be devastated.

I asked the driver to stop at a huge tree dressed in the nations flag. 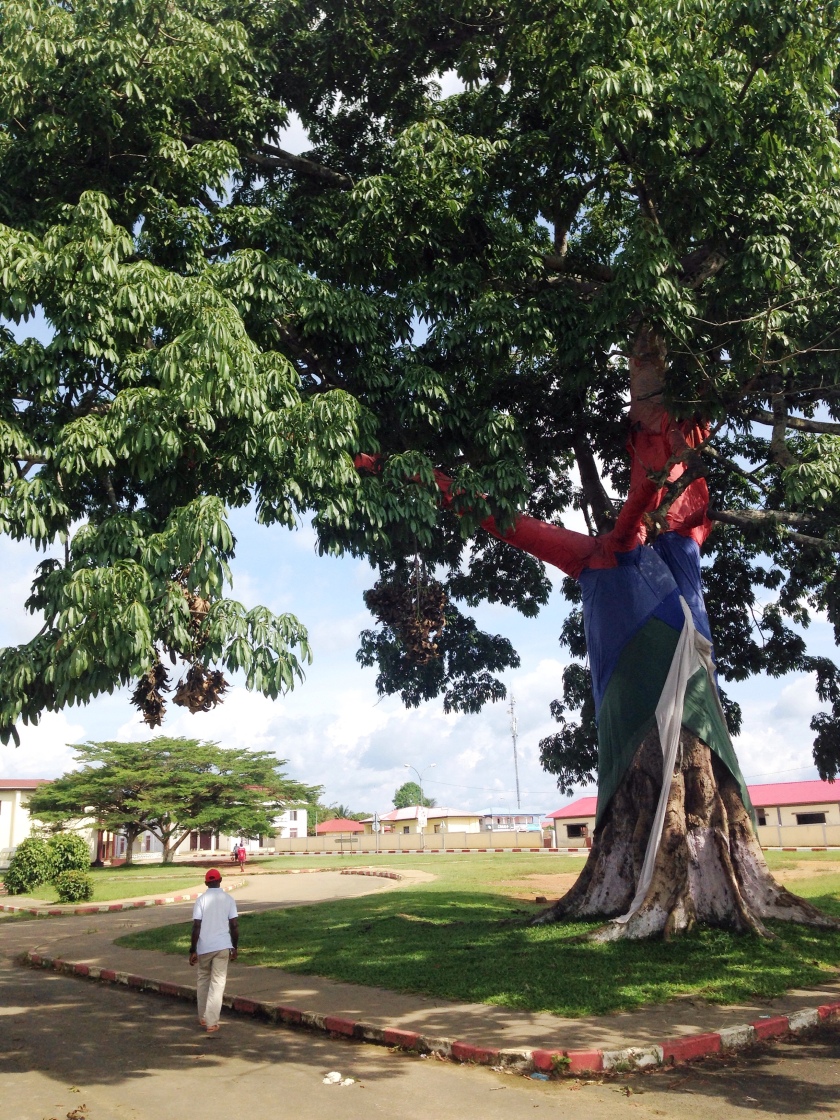 The strange thing is, where the barricade between these two countries fell, it actually partitioned the chaos of Cameroon from the tidy atmosphere of Equatorial Guinea.

One side, a deserted paved road.

The other had dirt roads, motorbikes dressed in intimidating looking drivers and feral dogs, all chewing trash.

The devil we know.

I was a sight to behold.

The power of a pole painted black and white.