After casually walking around the black and white border pole into dust bowl Kye Ossi, from Equatorial Guinea, I took a bike taxi to the only bus station in town, Elegance.

Elegance was not a good time.

To say I’d rather have taken a donkey wagon for six days instead, would be succinctly

I very rarely put my backpack on top of busses.

Or under for that matter.

Because my bag gives me every crucial comfort necessary to exist in the manner I’m fitted for, I almost always err on the side of keeping it within eyeshot.

I’ll gladly have it on my lap for seventeen hours while crammed into a hot people box, before I let Blade the driver hand bomb it into a menagerie of wicker baskets and Chinese made carry-ons, wrapped in dirty plastic bags.

Despite his insistence, which can, at times, seem suspicious.

(I suppose I’m sassy because I’m on a bus right now dealing with similar strife, my heavy bag bouncing off my knees, as the bus shakes me senseless.

And I have to pee)

The elegance bus was packed to the hilt with passengers when I arrived.

I actually looked in and said, “Nooope.”

Cueing Blade the driver, to talk me into liquifing into an amorphous blob capable of entering the Elegance sauna.

Because it would have been IMPOSSIBLE to bring my bag inside with me, I reluctantly put it on the roof and covered it lazily, with the communal tarp.

We arrived at the first police stop, within 15 min.

Special police, who smile as you comply with their demented instructions.

Him: Pick your butt now.

Him: Smell your finger.

Him: SMELL YOUR FINGER!

Nodding all the while, like jigsaw watching his victims enter a game.

He made everyone get out of Elegance.

Which was a feat on its own.

He checked ID cards, starting with mine.

For those unlucky souls who were without ID cards, he was especially dickish.

Asking irrelevant questions like, “Do you have a husband?” Intimidating the soft spoken and the shy.

Then he made the driver retrieve and return all the plastic wrapped Chinese carry-ons from the roof, where each was emptied onto the road.

This particular process lasted for over an hour.

We had been driving for less than 15 min

Their were so many police checks, I started hiding when cops made their way to the windows.

Putting my head down or looking away.

Anything not to be the white guy.

That’s how painful each stop was.

We were stopped a lot.

I counted twenty three, from Kye Ossi to Yaoundé.

There would have been more, if it had been daylight and not raining in fantastic fashion.

Even still, on three occasions I was forced off Elegance, taken to a shack and told to pay two thousand francs.

When I re entered the van, I told everyone “they wanted money from me”

That made me feel good.

We’re all in this together!

Except we weren’t in this together.

I had to suffer this alone.

Me and the three pigs, standing in the rain, flashlights pointed in my face, negotiating a bribe all the way down to zero.

If patience was easy, it wouldn’t be a virtue, I’ve read somewhere.

After seven hours of night driving to Yaoundé in an unsafe mini van, by a man who no doubt considers himself an immortal vampire race car driver, I arrived in Yaoundé.

At the difficult hour of ten.

Difficult because, well, Yaoundé is the capital of Cameroon.

When I eventually arrived, I had no sense of local cost and no idea where I was, in relationship to anything.

Making me the perfect cherry to be picked.

Add to this, it’s raining mercilessly and the driver of my taxi bike can’t find the hotel I’ve chosen, referenced in my nine year old guidebook.

Not as a tactic to con money from me either, as was almost always the case in Brazzaville

I surrendered to the only hotel in Yaoundé my driver seemed to know.

In name only, I assure you.

Ideal is not how I would describe my stay there.

It’s a rent by the hour kind of place.

The sounds of hungry cockroaches pushing their way through all the plastic garbage I dispatched when I arrived, was the sense cement that strengthened my infuriating insomnia.

Preventing me from getting any sleep.

In the early morning I relocated to a church on the hill.

The proprietor, a woman named Mary Joesph (swear to god) was a stickler for her imposed, nine o’clock curfew.

Which suited me and my reason for my being in Yaoundé, just fine.

To secure a Nigerian visa, of course.

I won’t bore you with monotony.

What I had to do to get the Nigerian visa was tedious.

Fulfilling bureaucratic tasks, like a neglected street dog at a Brazilian BBQ, or like a withered alcoholic sifting through dumpsters looking for wine bottles.

All of which is to say, I was focused and desperate.

Back and forth from the Nigerian embassy to the Hilton hotel, where the business center became my own personal office.

My mission: Deceive the Nigerians using the internet.

Inspiring me, I guess, to become a real Nigerian prince.

I didn’t want to go north to Chad then cross into Niger, just to go around Nigeria, nor did I want to rely on a boat, again.

The Nigerian embassy, after throughly testing my resolve, succumbed, after a fairly one sided negotiation, to issuing me a seven day visa.

On the condition that I wire fifty eight thousand francs from a seedy bank I’ve never heard of, to a twelve digit account number, with absolutely zero official affiliation with any Nigerian office.

Think of it as your final test, I told myself.

Me being Po, to Nigerias, Master Shifu. 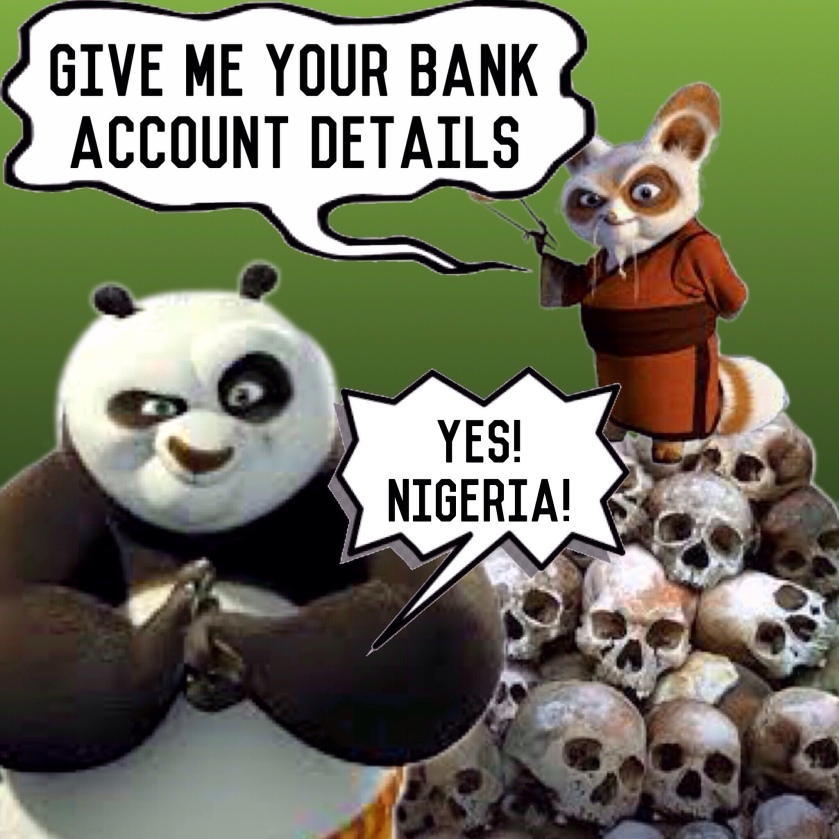 This bizarre stipulation excited my imagination which then prompted me to modify the limitations of my MasterCard, shortly after.

Sorry kids, MasterCard has to come inside for dinner.

In the morning he’s going to military school.

Days and days worth of clandestine hubbub, all for a seven day Nigerian visa.

The task wish list the Nigerians wanted me to complete, was doable.

Securing a strand of white hair from the Aga Khan, taming a unruly garbage rat or making a fake bus ticket to Benin from Lagos, all, made no difference to me, I was happy to get dirty.

A task is a challenge, where as “Frontier Ferme” is just a colossal waste of my effort.

By adding a severe time constraint to my time in Nigeria, a place I was already anxious about visiting, I was hyper aware concerning possible set backs.

Problems that were virtually invisible, were now, on my radar.

Problems I was already thinking about as I tip toed across the churches wet lawn at five in the morning, toward my waiting taxi.

Feeling Mary Joseph staring at me from the veranda.