A lot has happened since I was bewitched in Varanasi by what I must confess was a glimpse behind the cosmic curtain at our temporary mortal being.

As I’m sure you too can attest.

What with this fucking Bird Flu making everyone crazy.

Being in India at this moment is proving difficult.

There are currently government restrictions on renting rooms to foreigners as well as providing basic transportation options.

Which is, in my opinion, perpetuating these new negative reactions and behaviors local Indians are meeting tourists and travelers alike with.

What I want to do now is illustrate my most recent travel decisions, then inform you what my next steps are, in a two part series.

Be patient with me.

I’m out of practice.

Did I spend four days in Chenni swimming in a rather extravagant hotels infinity pool with my soulmates?

The comfort I experienced there was well beyond my means, not to mention a direct deviation from what I accociate with backpacking.

I’m a child of contrast, what can I say?

90 percent of the time I prefer to challenge my sensitivities, the remaining 10, I give myself permission to indulge.

I’m not saying live in a crack house then hit up Swiss Chalet. But experiencing extremes of any perspective can medicate ones expectations, if they go awry.

I spent my thirty-eighth birthday in Auroville.

I visited the Matrimandir three times before they closed it because of that which I refuse to say.

“What is the Matrimandir Bobby?‘

Imagine a golden orb in the middle of a field.

After making an appointment to view the interior I was bussed to join a tour.

After being briefed on the do’s and don’ts, lots of don’ts, I was walked in silence to what I now know is the most beautiful Banyan tree in the world.

Greater even than the one in Maui.

Columns of various widths scattered around the epicenter of a very ancient tree.

Watching people saunter through the vast coloums, some were so overwhelmed by emotions they turned into the tree itself, and cried.

An energy ripped out from these powerful emotions.

My chest tightened, then contracted with something very similar to warmth. Then a weightlessness overwhelmed me. In that moment, in the silence, I found peace with all things, and all.

You try describing the energy of a giant Banyon tree in the middle of a magical garden where people cry from sheer gratitude, without sounding like king of the hippies.

After a time the group was guided to the Orb, or the Matrimandir.

The Matrimandir is a golden sphere elevated above a circular water feature that pours into a small crystal ball.

There’s a light that shines into the crystal ball from above, from within the structure.

Sounds of nature accompanied by water gently flowing over the face of white granite slabs cut into the shapes of lotus leaves, flowing toward the crystal pearl in the center, had a settling effect for those of us seated around it.

The guide then motioned for us to follow her into the Matrimandir.

Some call it the spaceship.

I’m a thirty-eight year old man, after all.

Once inside the spaceship the color changed.

The interior is minimal, with a geodesic architectural frame work.

There’s a three story spiral stair case that wraps around the interior, paved in white carpet.

Before embarking on this slow ascension I was given white socks to wear.

That’s a mandatory Do.

We all walked patiently with mysterious curiousity.

I had several things cross my mind.

The first was, this is exactly like a vintage Halo map.

Please let there be a Vienna choir at the top of this thing singing the Halo theme song, I thought with fleeting nostalgia.

Then I thought of death.

The theatre of life and a cartoon I saw as a very young boy.

It was of a staircase that looked more like a mountain, at the top was a sheer drop into a canyon of bones.

It was labeled as “life” or something similar.

We all walked in silence, our earthly details camouflaged by a deeply mystic pink darkness.

Until we reached the chamber at the top.

Inside the chamber was a wave of silence.

A silence so profound it disturbed me initially.

In the darkness was a beam of light that must have been thirty meters high, pouring in a concentrated beam from the ceiling.

In the center was a giant crystal ball, probably worth five million emeralds from the city of Oz.

The light struck it in such a way that the center emitted a tornado shaped vortex.

Placed around the crystal, among fifteen giant white pillars were white blankets and white cushions, for us, the passengers.

Once I selected a seat it was my pleasure to focus on the scene before me.

The crystal seemed to morph into a hole, a portal.

The inner space, a glimpse into another reality.

I concentrated on it, past my urge to stand up and run directly into it where I would no doubt arrive at Hogwarts school of magic and wizardry.

I soon felt a rhythmic serenity that moved me back and fourth, subconsciously.

I had to open my eyes several times to verify people inside the room could not hear my thoughts.

Which at several moments became rather sexy.

Let’s say my masculine urges poured from me like a Patagonia raincloud.

After the group meditation, we exited the crystal chamber.

Walked back to the banyon tree then collected our personal effects.

I participated in this routine for three days in a row.

At the end of each day I said goodbye to a friend, as they left for flights back to Canada.

Until it was just myself and Dylan.

We used our last day together to zoom around the countryside provoking elitist cows with portiat photos. 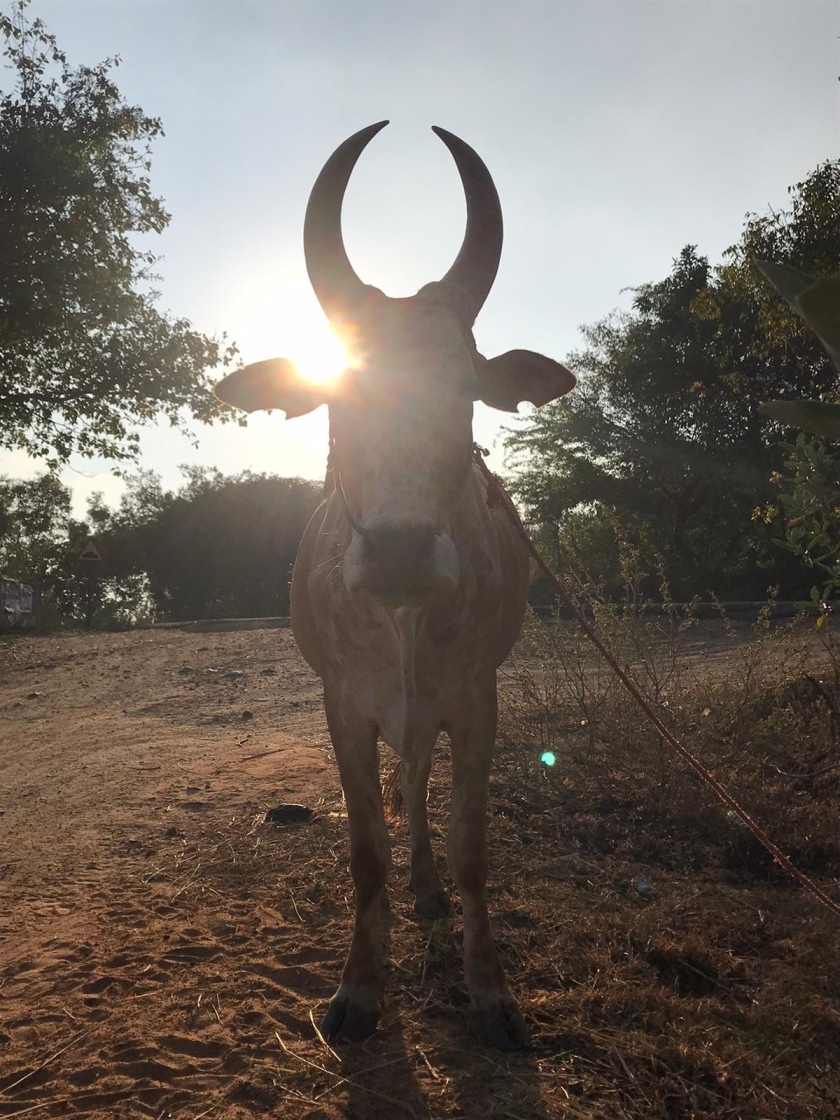 It was such a wonderful moment.

When Dylan left I accepted I was once again, alone.

I pretended that the past two weeks had been a dream.

I retired to my room and packed my things.

I was leaving in the morning for Rishikesh.

Despite a looming lockdown.